I’m excited to share a guest post by Martha Pruett, an author friend of mine. Martha is celebrating the release of book 2 in her series, Slater’s Deck. Her contemporary romances share military/ police themes that include the belief of service to others.

These concepts of honor and duty are explored in my own writing of warriors in the Rahki Chronicles; however, I asked Martha to share a bit about this subject as she is an Air Force wife. I think you’ll find her post, Family By Choice, to be a sweet and uplifting read. We should definitely honor those who protect us and our country…however, we can’t forget about the family that stands behind these brave men and women. 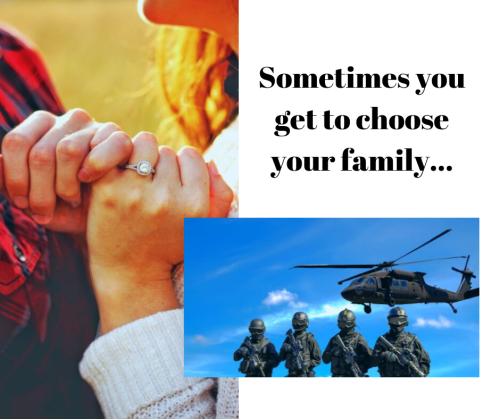 I have the distinct honor of being married to a man who has served his country. As an Air Force wife, I had firsthand experience with separation, daily concern for his safety, and the pure elation of homecomings after separation. His time in the military taught me many lessons, ones which I shamelessly use in my books.

The day my husband deployed for the first time was one of the hardest during my stint as a military wife. We had already endured eight months of separation while he went through basic training, technical training, and survival school. But we were able to speak once a week during basic, and once a day or more while he went through his advanced training. Now, however, there would be a time difference, internet connection issues, and his mission schedule to interfere with our communication. There was no telling when, or even if, I would be able to speak with him.

During his deployments, there were two things which helped:

While my husband was deployed, I worked at a hotel. One of my female coworkers was engaged to an Airman. Although her fiancé and my husband performed different jobs, we both understood what the separation was like and would spend time chatting about the challenges.

Hubby’s first deployment, the starter in our SUV went out and I ended up stranded downtown, at night, by myself. In tears, angry, and not knowing what to do, I called the only person who would understand. Without question or hesitation, my co-worker and her man came and bailed me out, ensuring I arrived home safely. She was my rock and I will be forever grateful for her love and support.

During another deployment, I went and spent over a week with my childhood best friend. Growing up we were closer than sisters, and although we hadn’t spoken in years that bond remained. When we reconnected, we were surprised to learn we were both military wives. She an Army wife, and I an Air Force wife. Although branches differed, the experiences were very similar.

When I visited Ace (the codename she used growing up) we didn’t have to speak to understand what the other was experiencing. We were extremely close as kids, and that bond only deepened as military wives.

Both of these women proved to be invaluable friends during the most difficult times. I could call one of them up, share my current struggle, and they would know just the right thing to say. These sisters were not related by blood, but by choice. I can’t imagine having anyone else by my side during that time in my life.

I also drew comfort from knowing my husband had brothers by his side. No, not his little brother who still lived at home when not in college. Brothers by choice. The men he served with. Those who sat beside him each flight, trained beside him, and encouraged him when I wasn’t able.

These men served with him every day, understood the struggle of separation from family and friends. Even when stateside, these guys remained a close-knit group. They would hang out together, eat meals together, attend barbeques at each other’s homes. Observing their interactions, and understanding they were deployed alongside my husband proved to be one of the most comforting facts. I knew, without a shadow of a doubt, that my husband had friends by his side.

He worked extremely long days. Their flights would end up being more than twelve hours on many occasions, and I know having brothers by his side helped my husband cope with the stress of the job. They played a vital role in his life for several years, and still remain his friends even to this day.

The concept of a chosen family is something I use without reservation in my novels. My special forces team and my SWAT Team are families by choice, but almost closer than a family connected by blood.

The Panthers, a special forces unit comprised of men from different branches of service, the best of the best, would do anything for one another. They would walk into any fire, face any foe, climb any mountain if it meant being there for one another. Panthers never leave a man behind, do everything within their power to ensure they all return home safely, and help hold one another up during the most trying of times. No hesitation. No questions asked. They are family.

Ten-David, Baltimore’s elite SWAT team is the same. Whatever challenges they face, trials they endure, losses they experience, they remain by one another’s side in support. They would do anything for each other, without question or hesitation, even if it meant risking their own life.

It has been proven to me that sometimes the family you choose is closer than the family you are born into. If not for this bond, deployments, separation, the unknown, all would be painful to face alone. But, both servicemen and women, and their families need not be alone because …

Sometimes, you get to choose your family.

I hope you enjoyed this guest post as much as I did!  Below, you’ll find a bit more about author Martha Pruett and her books.

BTW, if you get the chance to honor a hero or his/ her family, I hope you’ll take a moment and do just that!  I also hope you’ll give your family (by blood or choice) an extra smile today in appreciation for all they’ve done for you!

Martha Pruett grew up in Kenya, East Africa as a missionary kid. Having moved there when she was four years old she had ample time to enjoy life, the culture, the people, and gain lots of fun experiences along the way. Her writing began with simple poems and short stories. It wasn’t until her second year as an Air Force wife that she realized she had a story that she wanted to share.

Combining all her life experiences and love for writing brings her immense joy and she hopes that you enjoy her books. 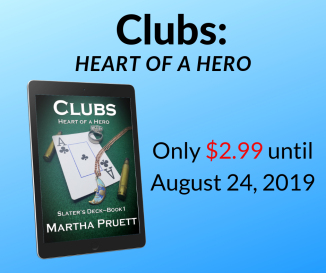 How far will heroes go to protect the ones they love?

Drew Slater, a dedicated Marine, husband, and father must endure constant separation from his family to keep them safe. For three years, he and his Special Forces unit have endeavored to locate and stop the efforts of those who threaten his family.

Roxy Carter-Slater, Baltimore SWAT officer, devoted wife, and mother wants nothing more than her husband to return home to her and their daughter, Ava. She understands the sacrifices all three are making to safeguard Ava, but her heart still yearns for them to be together.

When the life of an innocent is at stake, Drew, Roxy, and their teams must make difficult choices in the face of the enemy. Will one of them be called to make the ultimate hero’s sacrifice for a child? Will Drew find the peace he so desperately seeks? 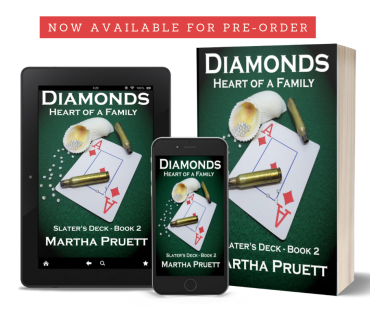 Sometimes, you get to choose your family…

Lieutenant Drew Slater is back in action as commanding officer of his Special Forces Unit. The Combined Forces Operator’s elite team, the Panthers, solidify brotherly bonds even as outsiders attempt to tear them apart. When orders come down for an undercover operation, the Panthers fly half-way around the world to the white sand beaches of Mombassa, Kenya. Their mission: to apprehend the one bankrolling a terrorist cell in the Middle East.

Officer Roxy Slater’s specialized S.W.A.T. training allows her to join her husband and his team on a covert mission to Africa. Working alongside the Panthers, she bears witness to the unit’s bond of brotherhood which equals the one Roxy shares with Ten-David. Both connections prove to be lifesaving when an unexpected disaster strikes. Whether in the field or on home soil, the Slaters’ chosen families remain by their side though devastating of losses.