I have another fun guest post for readers and writers! I found this particularly interesting as I do write combat scenes in my stories – it’s essential when you write modern warriors. While I do draw upon my training, it is certainly important to know how those action words translate onto paper. Whether you’re a reader or a writer, I think you’ll find this take on Writing Realistic Hand-to-Hand Combat Scenes interesting.

Read on to see what advice fellow author Joseph Carrabis has to share on this subject! 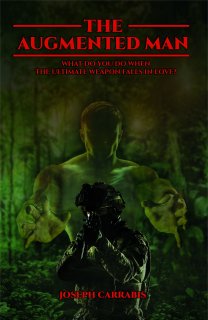 Have you ever been in real hand-to-hand combat? Not a playground pushing contest, a real someone’s-not-getting-up-again-ever situation?

Forget about what you’ve seen in movies, TV, and the like. Those are highly staged, choreographed dances, not fights. Everything they do is practiced so nobody gets hurt.

Now for something that will help you write such scenes: Forget combat details, they’re irrelevant. If it’s important a character knows Krav Maga share that information before the fight scene, not in it. Fight scenes must give the reader a sense of the fight’s quick, violent actions — use short sentences with small words — and readers should feel the violence — use strong, action verbs.

“Knocked” provides visual and kinesthetic information that “pushed” does not. Was the push hard or soft? Intended or not? We don’t know. The next sentence can be anything from “I grabbed for him, saying, ‘I’m sorry, I’m sorry.’” to “I kicked his head in.” But “knocked”? I used lots of force intentionally. I meant “him” to go down. You already know the next sentence will be “I kicked his head in” or something worse.

Which of the two above puts you closer to the action? “Explore” tends to be a “distancing” word in English — we “explore” something “over there.” We don’t explore our backyards. “Dig” implies an immediate, physical activity. We dig in our backyards. Strong, action words make a difference.

1) Ellie blocked Earl’s left with her right, moved into him, and caught him across the jaw with an uppercut.

2) Ellie blocked Earl’s left. She stepped in. Her right rocketed from her hip. The impact shattered his jaw.

Short, simple sentences make a difference. They take less mental effort to process. You want your reader to understand as quickly as possible that somebody got hurt, possibly killed. You want them to know it as a fact. You don’t want them decoding a series of parenthetic expressions to figure it out.

Want to make example 2 better? Remove “from her hip.” Her right is already rocketing. The visual is already from low to high. Let the reader’s imagination fill in where from.

Now we’re exploring foreshadowing. I did it earlier in this piece and, if I did it correctly, you didn’t notice it priming you to respond a certain way to something that came later.

My second paragraph has “Not a playground pushing contest” and two paragraphs later I have “I pushed him down.” The former foreshadows the latter and specifically attaches “pushing” to “playground” and “contest.” I’ve primed the reader to evaluate “push” as soft, childish, and not serious. The priming that “pushed” is soft left “knocked” to be more violent.

I foreshadowed a second time but the second foreshadowing requires some knowledge of your audience. I mention Krav Maga earlier in this piece. Example 2 is “Ellie blocked Earl’s left. She stepped in. Her right rocketed from her hip. The impact shattered his jaw.”

Readers with some combat training know Krav Maga is a martial art and will apply whatever martial arts training they’ve had to visualize the action even though example 2 describes simple moves: block, step, rocket. Readers with no training will enjoy it visualizing it as written. Is the difference important?

Yes, especially if your combatants are doing something exotic. Consider “Ellie blocked Earl’s left with her right. She locked his wrist and elbow against her abdomen. Her elbow smashed his ribs. He coughed up blood. A hammerfist to the groin doubled him over. A front knee strike shattered his jaw. He fell and she released his arm. He wasn’t getting up again.” Readers with training will accept and easily visualize that exchange. Readers with no training may slow down or even stop to visualize what’s happening.

Again, it’s a matter of foreshadowing. State early that your combatants have a specific training. The above, unprecedented, will slow untrained readers down. Somewhere before the fight, mention Ellie’s shelves of MMA trophies, or that she taught hand-to-hand techniques at Quantico. All readers will now read the fight scene knowing Ellie’s background and fill in details as they go.

Now notice something else in the above, starting with “He fell…” Remember “Use simple sentences”? What’s that compound sentence doing in there?

It’s slowing the reader down intentionally and foreshadows the end of the fight, stated explicitly in the next sentence, “He wasn’t getting up again.” The reader knows they can relax, Ellie’s out of danger. The reader can see Ellie taking a moment to relax from this encounter.

What if this isn’t a single encounter? What if Ellie’s on an espionage mission at a secret military base and doesn’t know what’s around the corner? Keep the tension level up — “Ellie released his arm as he fell.” SVO construction. More danger is coming. Keep the reader’s adrenaline high. The reader knows Ellie is still primed for action.

So you want to write realistic hand-to-hand combat scenes? Focus on your writing technique, not your martial arts technique.

Below is a bit more information on Joseph and how you can find him. Be sure to check him out! Until next time, happy writing and writing, my friends!

Joseph Carrabis’s short fiction has been nominated for both Nebula (Cymodoce, May ‘95 Tomorrow Magazine) and Pushcart (The Weight, Nov ‘95 The Granite Review) and has recently appeared in Across the Margin, The New Accelerator, parAbnormal, serialized in The Piker Press, and later this year in HDP. His first indie novel, The Augmented Man, is getting 4 and 5 star reviews on Amazon, Goodreads, Barnes&Noble, and others. His two self-pubbed books, Empty Sky and Tales Told ‘Round Celestial Campfires, are getting 5 star reviews (and he has more books in the works). Joseph holds patents covering mathematics, anthropology, neuroscience, and linguistics. When not writing, he spends time loving his wife, playing with his dog and cat, flying kites bigger than most cars, cooking for friends and family, playing and listening to music, and studying anything and everything he believes will help his writing.