“All the time we spend together, all the sneaking around.  God, it suddenly seems to wrong.” -Monroe referring to his time with Nick (Grimm)

First, as an FYI, National Best Friends Day was June 8, 2019. I’m not sure if they include fictional besties but that is what this blog post is celebrating!

I recently posted my first fanfic piece in years, and it was for Good Omens (you can read it here). What I noticed was that the shows that inspire me to write have one thing in common – friendships. We’ll discuss details below as I share some of my favorites. However, it is obvious plot comes secondary to character bonds of friendship for me.

The term ‘friendship’ can be vague. I’ve previously written blogs about villainous relationships allowing heroes to grow and shine.  Those relationships still fascinate me, but I won’t ramble about that again here. The fact remains though that enemies can be former friends. Lovers can be best friends. There’s some grey areas, but I’ve tried to stick to technically platonic friendships.

These relationships all serve a similar purpose. Friendships allow characters to grow and develop in new ways. The timid can become lions. The selfish grow into caring adults. At times, it was the characters seeing the truth for the first time.  Sometimes, the traits were always there, but the character was stuck in a role with others in their lives. The truth of who they were was hidden from those people and themselves.

Friendships can free characters to become more of himself/ herself.  It happens often in books, TV, and movies alike, and it’s beautiful to see when you are invested in the character.

To clarify one point, friendship here doesn’t refer to a sidekick included for comic relief or to be sacrificed (as is often the case in horror movies).  I’m talking about a strong platonic bond between two characters. Such characters are the ones that impact me as a reader/ viewer and inspire me as a writer.

Of course, I do have a few examples to share: 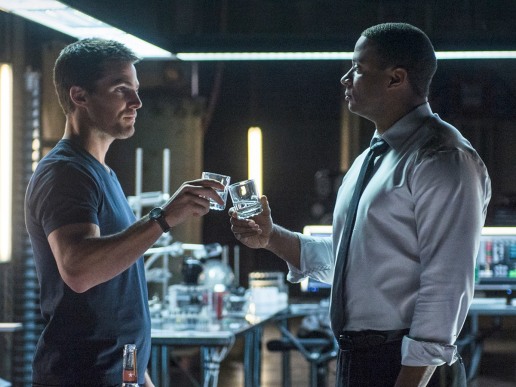 I’m no longer current on this show so I’ll speak only from the first few seasons.  I’m also going to leave out references to Felicity even though she was part of their original group.

Oliver Queen was bound and determined to accomplish his goal of revenge/ justice his way.  John Diggle didn’t just join and fight by his side, he also changed Oliver’s goal and methods.  Their friendship brought out new sides to Oliver and allowed some light in an otherwise dark first season.

However, it wasn’t one-sided.  John also changed and grew though he was a stabilizing influence on Oliver.  In later seasons, there was more growth and even some role reversals. Those role reversals are always some of my favorites for any characters.  You get to see them walk a mile in another’s shoes, and both are changed by it. Those subplots also deepen the characters’ understanding of one another and tighten the bonds of friendship.

While Oliver and John risked their lives together on a nightly (or at least weekly when the show aired) basis, it was the smaller day to day things I enjoyed the most.  It was the shorthand speak that came from sharing their lives. It was the habits that developed over time into tradition.

That relationship still impacts how I write my characters because I fell in love with Arrow when Oliver and John became friends. 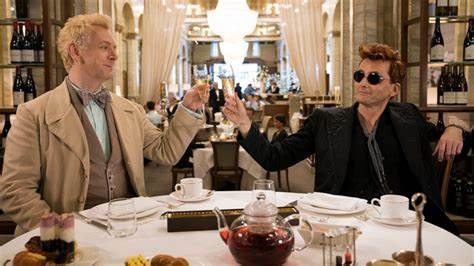 From my oldest obsession with Arrow, we move to my newest one.  Indeed, one of my favorite fanfic authors dabbled with this fandom, and I loved it!  I’m trying not to ramble, so let’s keep this going.

One quick note though – I only just bought the book so my views are based on the Amazon series.

Opposites attracting is a classic romantic trope and seems very much like a case here.  However, I’m not even going to worry about any romantic love between these characters. I’m fascinated by the friendship love that develops and is displayed so beautifully during a story about the impending end of all mankind.

As someone with a degree in history, I very much enjoyed those past glimpses into these characters’ lives.  The history was fun, but they also showed the development of their relationship. Curiously though, it’s that first interaction at the Garden that immediately snagged my attention.  They both had jobs to do, but neither quite followed the rules. They didn’t seem to be the best angel or demon. Again, it may be a trope, but misfits bonding together because they are alone can be very powerful!

I won’t spoil the ending but those last scenes truly show a friendship in their knowledge of one another.  Again, much like romance, friendships include shared intimacies that connect two people and exclude others.  Crowley and Aziraphale are certainly bonded together!

They’ve definitely given me some new author goals for writing my characters! 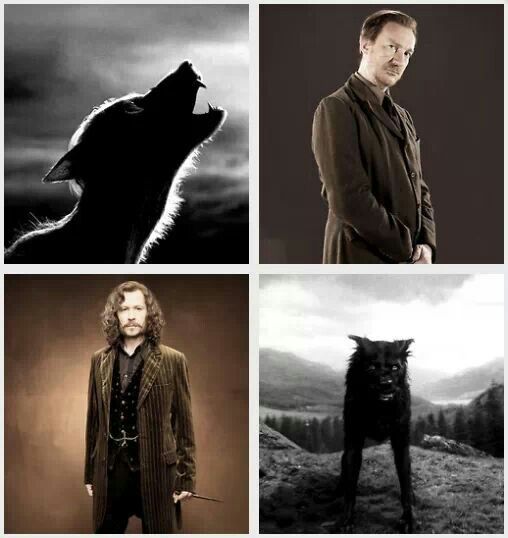 Friendships form a cornerstone of the Harry Potter books. However, I don’t want to celebrate the main three, but instead two others. This particular post is bittersweet for me.

Remus Lupin is one of my favorite characters for so many reasons! He is very much the lone wolf (yes, pun intended) except for that brief period where he had friends in James, Lily, and Sirius. The man we meet in Book 3 is the shell that remains. His haggard appearance truly reveals his suffering in my opinion.

Then Sirius Black reappears. In one another, they can cling to that earlier time of happiness when both found not just friendship but best friends that became family. Despite the dangers, that time in their lives also included grand adventures and a higher purpose…until it all came crashing down in death and destruction.

In many ways, I feel Sirius struggles to move on from his past, and he certainly has some traumas to overcome. He remains a bit of that rebellious, angry teen/ young man whose life was stolen unfairly when he was imprisoned. Remus responds differently though. I think that brief re-connection with Sirius (along with other factors) allows Remus to move on to happier times again.

HP balances a host of characters and relationships beautifully. The characters grow individually and the relationships evolve with them. Remus and Sirius are but one example. And yes, JKR gives me more author goals! 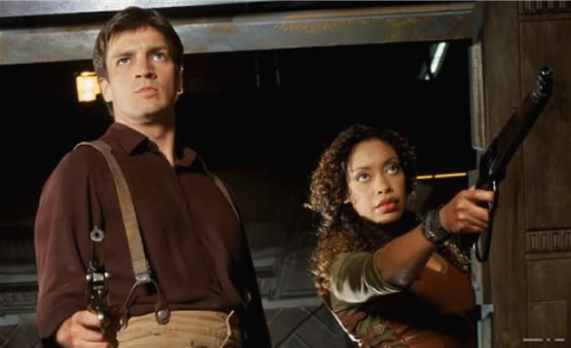 [Some spoilers but only general ones]

I do consider Firefly/ Serenity to be an ensemble cast (which did give me yet more #authorgoals), but the group is firmly rooted in the friendship of Mal and Zoe. It is bloodstained bonds that link the pair as their friendship was born during the trauma of war. The show and subsequent movie start well after those initial events; however, we get enough info to understand how deep their connection is. Each depended upon the other for their survival. That dependency typically excludes other characters in many ways.

This was addressed periodically in the show. Zoe is married and her relationship with Mal was never romantic, but her husband reveals some insecurities and a bit of jealousy. Likewise, I think Jayne resents that Zoe backs Mal’s plays and is always on his side.

As I mentioned, I do see this as an ensemble cast which balances the development and relationships of multiple characters. Each character’s actions and growth ripples out to reach every other character in some way. It’s like a Jenga game of each character’s emotions, needs, connections, and choices. If you remove Zoe and Mal though, I think the entire thing would all crumble.

To paraphrase Zoe at the end of Serenity, their relationship has been beat up plenty, but they continue to fly true. 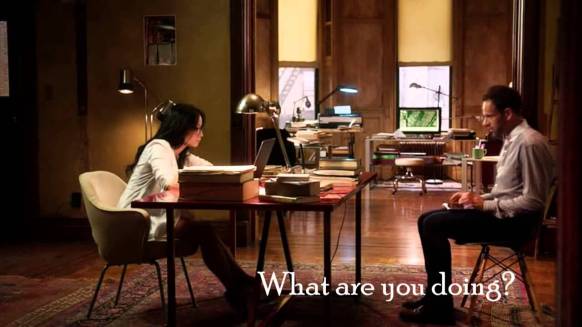 This is a show I still watch, and one of the few I’m not in favor of seeing a traditional romance between the leads.  This is unusual for me because I’m someone who enjoys shipping couples, and we do have that fantastic new bee species scene on the rooftop!  Anyway, their development and changes personally and together form the backbone of the show in my opinion.

There’s a ‘will they/ won’t they’ feel teased but actual romance isn’t necessary to prove their intimacy.  From the beginning, they interacted differently together than they did with other characters. Both characters grow through difficult times, and their relationship changes and grows too.  It has been a beautiful journey that includes sweetness, darkness, and more than one role reversal.

There are again parallels to romantic relationships especially as they live together.  A shared home and life certainly bring as much intimacy as a romance. It also serves to further alienate them from others and strengthen their bonds.  Their choices prove time and again they know each other well and will (almost) always put the other above anyone else.

Much like Good Omens, you don’t need to see a typical romantic relationship to feel the depth of emotion shared by this duo.  It’s a different spin on the classic Sherlock Holmes but the pairing of Sherlock and Watson remains steadfast in this story. 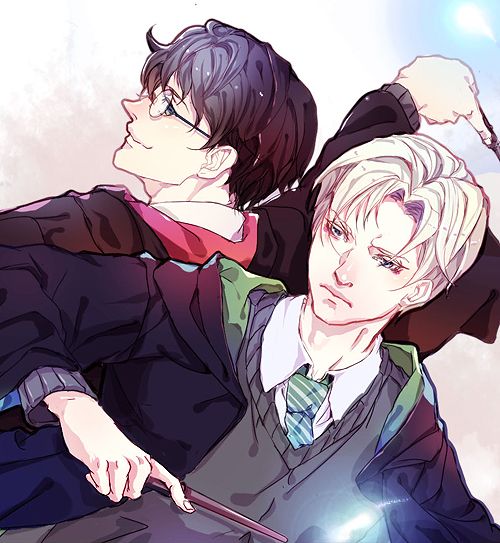 Imagine that Harry hadn’t found friends on the Hogwarts Express. How different things would have been if he’d been accepted Draco’s hand and friendship instead?

If you’ve never read fanfiction, this type of question inspires many such stories and takes. There are definitely some great reads out there too.

Can you imagine your favorite besties without each other? Holmes without Watson? Crowley without Aziraphale? Harry Potter without Ron and Hermione? I think there’s certainly potential for story variations, but it also demonstrates how important friendship can be in a character’s life. 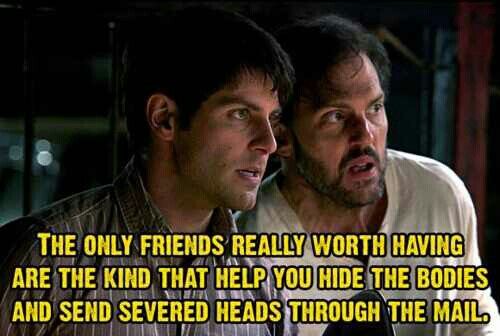 For each of these examples, the characters rarely call themselves best friends.  Many of them do say partners. As a writer, I place great importance on word choice. That’s fine when I’m the one writing it; however, it sometimes leads me to read too much into another writer’s work.  Regardless, I find it curious and sweet that the friends see themselves as partners as that’s a word often used to describe couples.

If you are currently a writer or you want to be one, consider adding a platonic relationship in your character’s life.  I certainly prefer a character-driven story and can overlook plot issues when I have fallen in love with the characters.

Characters are the human element to the story (even when they aren’t strictly human) and ‘no man is an island’.  Friendships grow the characters as much as plot does. They also provide a unique way to connect readers to characters.

No one actually wants a supervillain nemesis and many already have a romantic love in their lives.  However, we can all appreciate finding a new friend who shares our interests and also enjoy celebrating the familiar traditions shared with an old bestie.  Friendships form the cornerstone of our lives and of our favorite characters’ lives.

“Lighten-up, I’m just making a point. I’m not that kind of big bad wolf. Come on, let’s grab a brew.” – Monroe [Grimm – I would need a separate post to ramble about all things Monroe/ Nick, but I may just have to do that!]

Let’s grab a brew (or the drink of your choice) and toast friendships whether they’re fictional or real life!  I would love to continue this chat, but now it’s your turn. Who are your favorite fictional best friends? Writers, have any friendships impacted your writing?